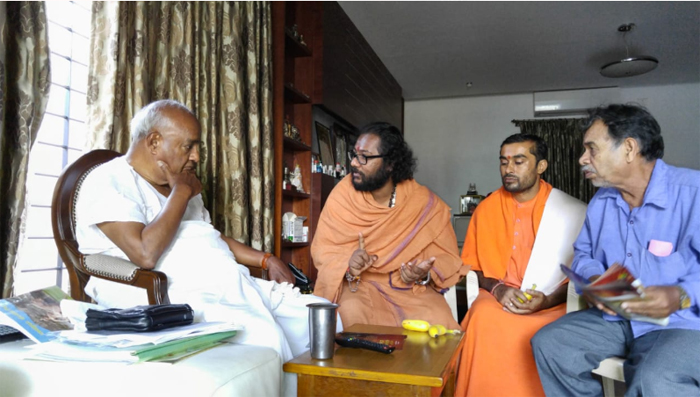 A couple of days after the declaration of the Karnataka Election result, a new hero have emerged in the South Indian state, Raja Guru Himaval Maheshwara Bhadraananda.

Days before the Karnataka’s inconclusive election result started disturbing the political hemisphere of the state, the famous Kerala ‘swamy’ who visited the former Prime Minister and JD(S) leader, H D Deve Gowda asserted that his son would definitely became the Chief Minister of the state. 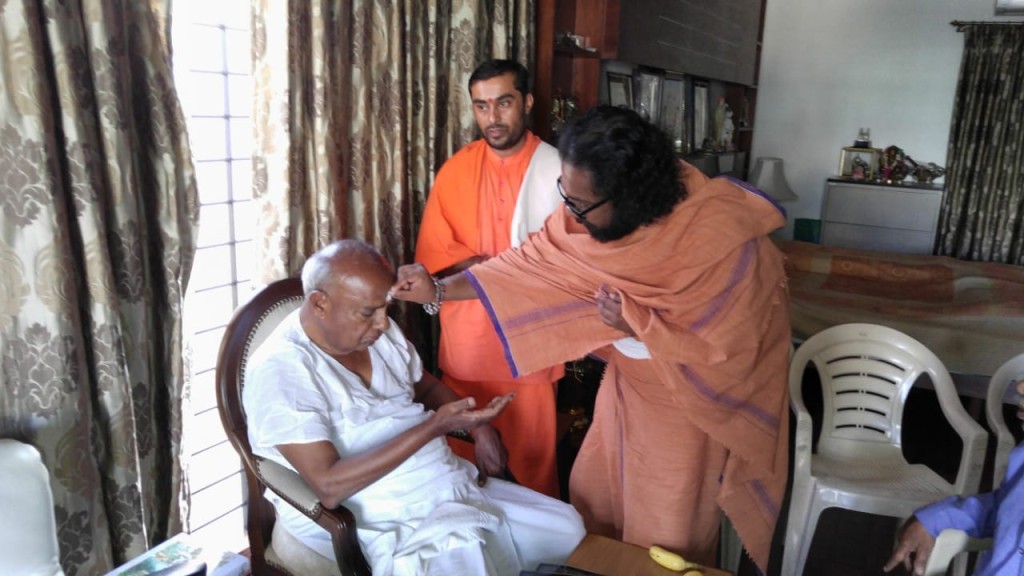 He also reciprocated his predicts before the media persons who met him. Noteworthy, at the time the ‘swamy’ made the unusual prediction, the party of former PM had no chance of winning the top seat. Moreover, the reporter who showed courage to write a story about the godman’s prediction had suffered serious criticism and mockery when the BJP leader, B S Yeddyurappa formed the government.

The rest is history. A twist has happened unexpectedly when the newly inducted CM has decided to resign from his post citing the lack of majority in the Legislative Assembly.

As the JD(S) leader and son of the former PM, H D Kumaraswamy is preparing to take oath in the coming Wednesday, all eyes are searching the famous ‘Swamy’.

He has recently predicted that Kumaraswamy’s aura is suffering from the influence of dragon head. He has added that if no one helps the JD(S) leader to mitigate the effect of this negative influence of his aura, he would loss the reputation, power, financial stability and influence in the near future.

‘Swamy’ has further added that if ousted CM Yeddyurappa gets expert advice to resolve the negative influences affecting his aura, he might be able to regain everything he has lost recently.

The ‘Swamy’ has noted that unfortunately there is no one in the Yeddyurappa camp who has the sufficient knowledge to advise him how he can mitigate the negative influences of his aura.

It is his sixth sense which helps him to make these predictions. The major difference between normal people like us and this legend is that we only understand future once it becomes past but no future is invisible to this extra ordinary man.

When he was as young as twenty four, this ‘Guru’ of ‘Gurus’ became a ‘Raja Guru’ after solving a serious issue faced by then King of Travancore Uthradom Thirunal Marthanda Varma. The famous ‘swamy’ has earlier also attained public attention several times in the past through his predictions. Some of his popular predictions are: tsunami warning, controversy related to BJP President Amit Shah’s son, former Kerala CM Oommen Chandy’s solar scandal, unexpected demise of former Tamil Nadu CM J Jayalalithaa, Mumbai terrorist attack, and unexpected downfall of actor Dileep.

This ‘Swamy’, who is a Sanadhana dharma preacher and highly dedicated social fighter, is not only famous for his predictions, but also for his persistent fight against social evils, communal terrorism, extremists and drug mafias.

Moreover, Shiva Yogi Swamy Badrananda, who is the voice of poor and marginalised and future teller, was only twenty one year old when he became a political ‘Chanakya’.