The Elderly of the Country

Shanti is a small, bird-like woman with unkempt grey hair, a wizened face and an innocent, trusting smile. The constant smile is remarkable because her life is unbelievably difficult. She lives in a mud hut in Katihar district of Bihar with her paralyzed husband. Her daughter has been married off and her son has “gone away somewhere to find work”, never to return. She has no land, and there is no work in the village.
What is standing between Shanti and starvation is her buffalo. It’s an ill-fed animal, giving just 4kg milk a day. Shanti and her husband sell 2kg and use the remaining milk themselves.

She is questioning as to why the government can’t give old age pension or pension for handicapped people like us? It is to seek an answer to this that she had come to participate in a dharna at New Delhi’s Jantar Mantar, organized by the Pension Parishad, a coalition of 150 organisations fighting for universal old age pension. The Parishad has organized such dharnas to coincide with the last six consecutive Parliament sessions with participants from across the country.

Baba Adhav, the aged but indomitable leader of Pune’s Hamal Panchayat (headload workers’ union), said that continuous pressure on the government had brought some change in thinking. We have met Sonia Gandhi, Manmohan Singh, Sharad Pawar, Kumari Selja and Jairam Ramesh, he says.
“They all know that this is a problem. With elections round the corner, they have to think about this vast elderly population.” he says.
But the Parliament was adjourned this time too without any succor to the elderly. The Parishad called it a “betrayal”. “The PM and his advisers seem to think that budget deficit is more important than the lives of thousands of elderly,” said an angry Nikhil Dey of the Parishad.

There are an estimated 10 crore people aged 60 years or above in India as per Census 2011. If you take people 55 years and above, the number rises to over 14 crore. In Indian society, the elderly usually depend on their children to look after them. Over 30% male elderly and a staggering 72% of women depend on others – usually their children – to survive, according to a NSSO report of 2006.

The government runs three programmes for giving pension to old people, handicapped and widows. The Centre and the states put together spent Rs 14,370 crore on old age pension in 2011-12. The Centre’s share in this was just 34%. The ministry of rural development says that 2.14 crore elderly people get old age pension. That’s just 20% of the elderly.

The central government gives a princely sum of Rs 200 per person while the states have to match it equally. Some, like Uttar Pradesh give only Rs 100 additional. Assam adds only Rs 50. Tamil Nadu gives Rs 600 more. There are different income and age conditionalities in states. Gujarat has one of the lowest state contribution because it has Rs 24,000 as the maximum annual income for which pension would be given. In some states, like all four southern states, the minimum age is 65 years. Whatever be the case, the average monthly expenditure over the whole 60 plus population is an abysmal Rs124 per capita.

The Pension Parishad is demanding universal monthly pension of Rs 2,000 for all elderly of age 55 years or above. This would entail an expenditure of Rs 2.31 lakh crore. If Rs 500 is given to males over 57 years and females over 55 years, as in Rajasthan, the expenditure would be Rs 27,668 crore.”If the government can pay Rs 1.16 lakh crore annually to its retired employees, then surely it should pay Rs 2.3 lakh crore to 14 crore elderly people (of +55 years age),” says Shankar Singh of the Mazdoor Kisan Sangarsh Samiti, one of the constituents of the Pension Parishad. The elderly are planning to come back to Delhi in January next year. We will mobilize support from other sections of society and besiege Delhi next time round, Dey vowed. 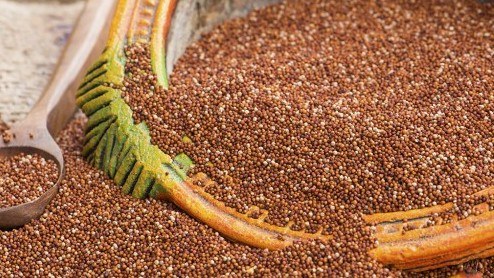 Know how to consume the wonder grain, ragi