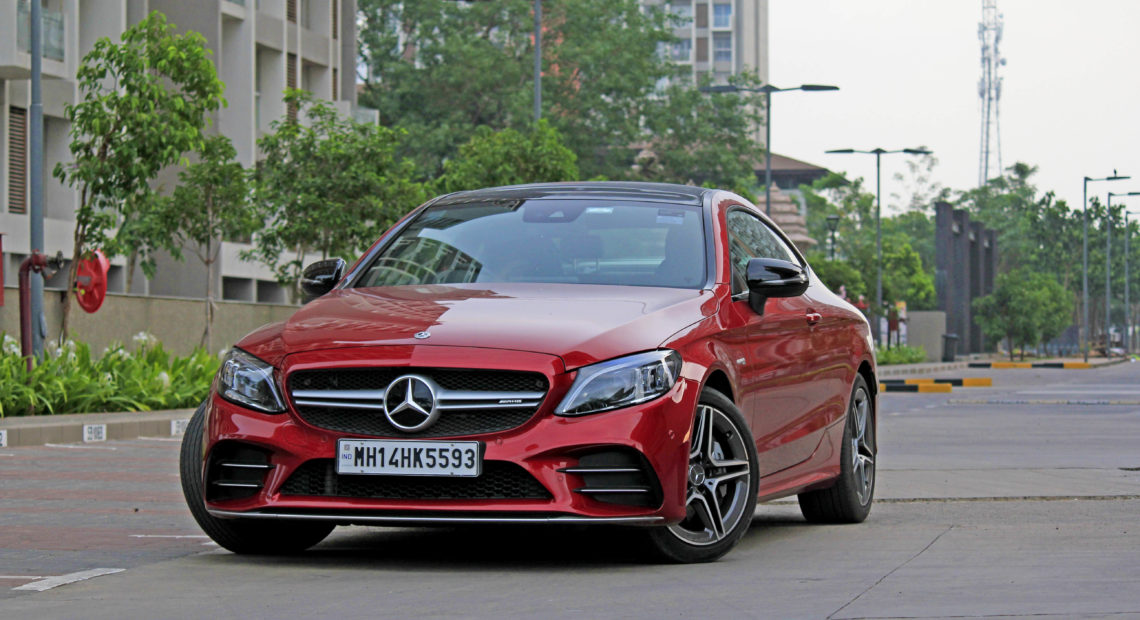 The Mercedes Benz C43 has always been the perfect ‘stealth performance’ sedan that you could use every day. It looks like a regular C class with some sportier bumpers, but you could do 0-100km/h in less than five seconds when needed. Every time you start it up, it was silent without waking up the neighbours, and as long as you don’t buy it in one of the sportier colours, you could blend into the corporate parking lot and no one would notice. Perhaps that was one of its biggest issues, because for some people, they wanted quite the opposite. They need the attention. They need the looks to reflect why it was nearly twice the money of a regular C class sedan.

Enter the C43 AMG coupe. Mercedes’ decision to launch the face-lifted C43 only as a coupe is a great one. Now, it has the drama to go with the performance. The roof is lower than the sedan’s and now stretches across to the heavily raked rear glass. The front end is unmistakably like in a C class, but the rear is completely different with stretched out tail lamps and a rear diffuser with quad exhausts. The car has a more muscle car look with extra bulk around the rear wheel arch area. The wheels are classic AMG twin five spokes in 18 inches, and they complement the Designo Hyacinth red colour of our test car.

Because of the lower roofline, the interiors are cozier too. But, you will love the supportive seats with their red seat belts. The dashboard is the familiar C class stuff, with the fantastic quality of this era of Mercs shining through. The rear seat is fine for short distances but you are limited by the amount of headroom and legroom. Getting in there requires some effort and is best suited for children.

Unlike the 63 engine, the C43’s engine is not hand-built at the AMG Factory in Affalterbach, but it does get AMG specific turbos, exhaust and tuning. The 3.0 litre twin turbo V6 now develops 390bhp and 520 Nm torque. That is 23bhp more than the old car, and it now does 0-100km/h in 4.6 seconds. The top speed is limited to 250km/h.How easily you get there will certainly leave you impressed. Acceleration is still mega, and because it is all wheel drive, it doesn’t waste any power with wheel spin. There is a constant surge and it pulls well to 6000rpm instantly. Use the paddles and you would be surprised how quickly it revs. One can only wish it had a higher rev limit. The 9 speed automatic does a decent job, although it could have been a bit faster with the downshifts. The C43 also sounds good although not as vocal as the 63. For most part it is calm and comfortable, but it does get rorty when you floor it, more so in the Sport Mode.

The C43 also packs three stage adaptive variable damping, with new steering knuckles and load-bearing joints on the spring link at the front resulting in negative camber, and pretty much exactly the C63’s settings at the rear. The brakes are monstrous internally ventilated compound discs with a diameter of 360mm and 320mm.

The big difference is how it drives compared to a C63 AMG. While the C63 is a tyre shredding hooligan with all its power sent to the rear wheels, the C43 has all-wheel drive. And on wet roads, the grip from the all-wheel drive system is quite handy. You can confidently floor the accelerator midway through a corner and put all the power down without the ESP having to overwork. On a wet track, I reckon it will be even faster than the C63. It is quite a rear biased all-wheel drive system with 31:69 torque split front and rear. That said, it could be more of a playful car in the corners and save some weight by being just rear wheel drive.

The steering is pretty accurate though it could do with a bit more feel. The brakes are fantastic and stop the car from speeds without any fade whatsoever. The ride quality is on the stiffer side and the suspension can send a bit of thud when you hit a broken patch unexpectedly. The tyres are 225/45 R18 at the front and 245/40 R18 at the rear, giving you good grip.

Blending good looks, decent everyday practicality and good performance, the C43 AMG is in a class of its own. While it was already a perfect all-rounder in sedan form, the new coupe variant has boosted its appeal even further.