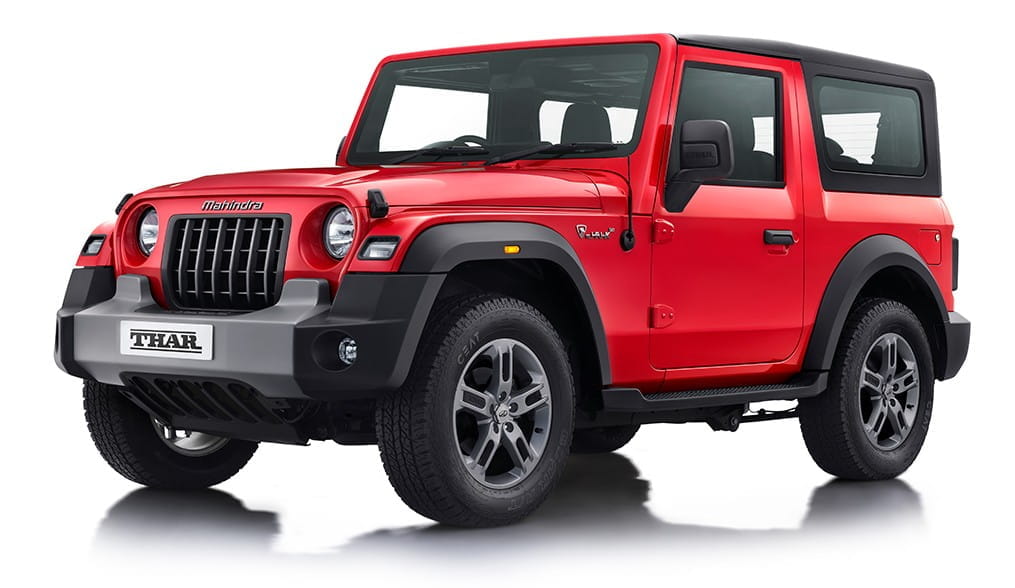 After waiting years for the new Thar to come out, we finally got a chance to drive it. On Independence Day, we became the first few people outside of Mahindra to drive it and we were beyond thrilled. It was a marked improvement over the car it replaced and needless to say, became an internet sensation overnight. Videos on YouTube were clocking a million views and Thar enthusiasts were watching them over and over again. The launch will only happen on October 2nd and already they have a lot of potential buyers queuing up. Here is why.

This is how a modern interpretation of the legendary Thar should be. The proportions are spot on. The new Thar is wider and looks more purposeful. The front bumper runs into thick fenders that are square shaped at the front and circular at the rear – a design element that harks back to the previous generations. Yes, the new Thar looks like a Wrangler, but if they both started out as modern versions of the old Civilian Jeep and decided to stay true to the original, they are bound to look similar, right? And at least here in India, you can get the Wrangler only as a long wheelbase five door model, so that makes the Thar a lot cooler in our books.
The Thar is built on a new hydro-formed, body-on-frame chassis similar to that of the Scorpio. There is a roll cage that connects the top of the B pillars and runs on either side of the car all the way to the back. The doors are removable and Mahindra says the whole interior can be hosed down although it’s not easy as that. Fit and finish is top notch, and although panel gaps are big by modern day standards, they are consistent. It looks best from the sides or rear three quarters where the 18-inch anthracite wheels and chunky 255/65 R18 tyres fill up the big arches. The boxy hardtop is rugged enough and is made of two pieces. It has fixed glass windows on the sides while the rear glass is a hatch and opens upwards. Yes, that grille is a last minute job to avoid legal tangle with FCA and that’s the only thing we didn’t like. Funnily enough, aftermarket replacements are available even before the car is launched. 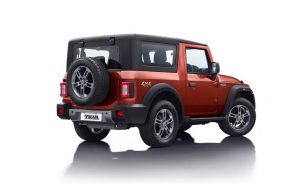 The interiors are totally revamped and feels upmarket enough. The ergonomics are way better than what it used to be and the dashboard feels solid and built to last. The thick steering wheel and some of the switch gear are borrowed from other Mahindras. The gauge cluster feels modern but very minimalistic. All-round visibility is fantastic and most will love it for that. The front seats are well shaped but aren’t very comfortable because of the way they are padded. The forward-facing rear seats which are accessed by flipping the front seats forward, are a bit low, but have decent legroom and headroom. If you are used to the fabric soft top of the old Thar that starts flapping after 70kmph, you will be impressed by the new hardtop too. This is a strict four-seater, and the boot is quite small to take in all their luggage. This fully loaded Lifestyle series (LX) car has a lot of features like ESP, Cruise control, hill hold, hill descent control, tyre pressure monitoring system, a 7-inch infotainment system with Apple Car Play and Android Auto, electrically adjustable mirrors etc. The Thar comes with the option of a hard top, a soft top and a convertible soft top. There will also be a more utilitarian AX version called the Adventure series with jump seats, 16 inch wheels etc targeted towards hard-core off roaders, joining the line up soon.

The new Thar will have a choice of 2.0 litre 152bhp petrol with 320Nm or a 2.2litre 132bhp diesel with 300Nm paired to a six-speed manual or a torque convertor automatic. These new engines will be offered in a lot of new cars from Mahindra and Ford in the future. The one we tested was the diesel manual and the first thing you notice is the refinement at low revs. The engine also has a wide power band and pulls cleanly past 1000rpm, giving it great drivability. Performance is sprightly, although we are yet to fully test it both on and off-road. The clutch is not too heavy but the gearbox is a bit notchy and has longer throws.
The Thar gets new independent front suspension and a multilink setup for the rear dead axle. This has transformed the way it drives and it now feels like a shorter wheelbase Scorpio 2.2 VLX. The steering is more precise and does kickback a little on bad patches, but the chassis is much more capable on road with better front-end grip giving you confidence. The ride isn’t fully sorted and it tosses you around but not to the point where it gets uncomfortable. There is also a bit of body roll and pitch as there would be in this class of vehicle. The brakes feel a bit spongy and take some getting used to, but they have good stopping power. Though it isn’t as dynamically sorted as a modern-day crossover, you can drive it on the road and go long distance touring with it. 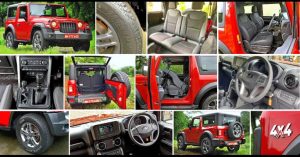 The Thar has 226mm ground clearance, 42 degree approach angle, 37 deg departure angle, 27 degree ramp break-over angle and a 650mm water wading capability. The wheel articulation seems to be lesser than before, but with mechanical locking diffs at the rear, front electronic locking brake diff, a low ratio and other electronic aids, it has more than enough capabilities to keep the average off-roader happy. We took it for some mild off-roading and the Thar seemed to be unfazed by it all. The long travel suspension can take some nasty jumps and it can carry a fair amount of speed through a beaten paths. The best part is our test car felt stiff and solid with no creaks or rattles even after all that abuse.

It is the most talked about car on the internet and for a good reason. It is a vast improvement over the old Thar. It is good to drive both on and off-road. With the snug hardtop, forward facing seats and more creature comforts, it has become more practical. It can be a fun daily if you want it. The choice of automatic with petrol or diesel powertrains makes it even better. The new Thar is one of the best things that happened in 2020.