India’s insurance sector is poised for take off – V.P.Nandakumar 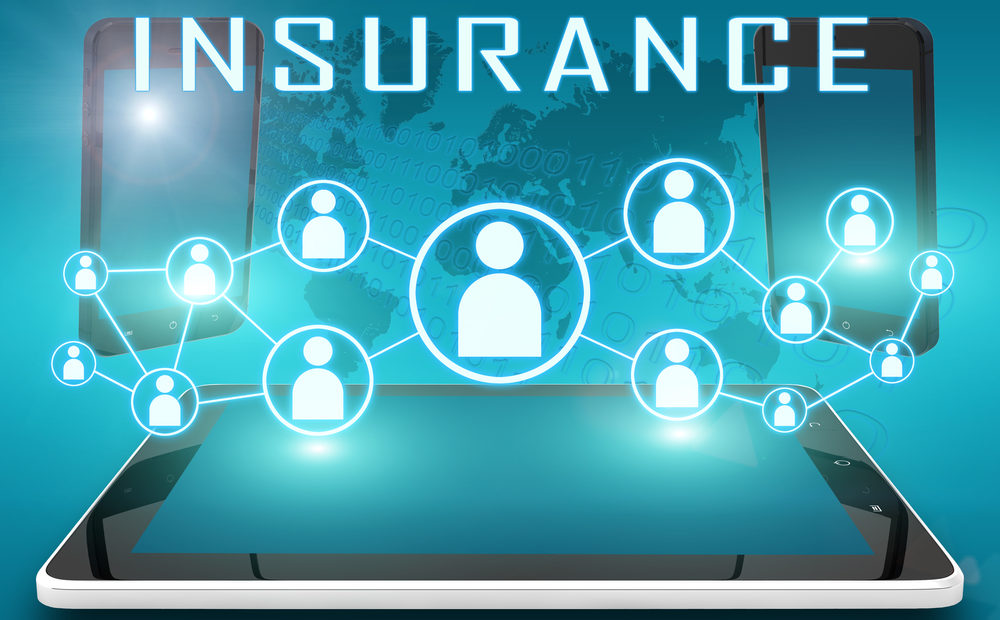 Over the last couple of years, I find that I am asked a lot of questions about the performance of Manappuram’s new business ventures such as microfinance, home and vehicle loans, SME loans etc. The curiosity is understandable. Manappuram Finance Limited was for long known as a gold loan company because that was what we focussed on. It was only from 2014 onwards that we began exploring opportunities in other growth areas too. And people understandably want to know how our new businesses are faring.

At the same time, there are a couple of other business areas where our involvement goes back over many years.  One of these is forex remittances which we began in 2002 after obtaining a moneychanger’s license from RBI. The other area we got into early on (in October 2002) is general insurance which is the subject of this article. I have chosen to talk about general insurance because the strong impression I get from our involvement in the business and the kind of growth we are seeing here is that India’s insurance sector is poised for rapid growth in the coming years. Indeed, it may not be long before the insurance industry acquires a size to rival that of our banking sector.

The Indian insurance sector has been growing at healthy rate of 15 to 20 percent and is expected to reach a size of US $ 280 billion by 2020. Even as these numbers appear impressive, the reality is that India being the second most populous nation in the world (at 17 per­cent of the global population) records less than 1.5 percent of the total insurance premium collected globally. While India is the world’s 15th largest insurance market by volume of premium collected, its insurance density (or per capita premium) stands at Rs 3,696 as compared to the global average of Rs. 44,486 according to a BCG-FICCI report of March 2017.

The BCG-FICCI report mentions that India has around 605 million people be­low the age of 25, and 225 million in the age group 10-19 readying for higher educa­tion. Over the next 40 years, India will enjoy the benefits of a youthful and productive work­force even as the rest of the world, includ­ing China, continues to age. By 2020, India will have around 116 million work­ers in the work-starting age bracket of 20 to 24 years, compared to China’s 94 million. The average age in India by 2020 will be 29 years as against 40 years in the US, 46 years in Europe and 47 years in Japan. Even as the labour force declines by 4 percent in the industrialized world and by 5 percent in China over the next 20 years, it could increase by 32 percent in India. India’s insurable population is anticipated to reach around 750 million by 2020, with life expectancy of around 74 years.

Overview of the Global Insurance Business

The origin of the US insurance industry goes back to 1752 with the setting up of the Philadelphia Contributionship for the Insurance of Houses from Loss by Fire, the first mutual fire insurance company in America. Seven years later, the first life insurance company, the Presbyterian Ministers’ Fund, was established. The industrial revolution made both business insurance and disability insurance necessary. In 1864, the Travelers Insurance Company sold its first accident policy, while in 1889 the first auto insurance policy was issued. As time passed new types of insurance products were devised in keeping with the emerging risks of an increasingly modernising lifestyle. Today, the US is the world’s largest single country insurance market with 29 percent of global direct premiums written in 2016 (according to the Federal Insurance Office, US Department of the Treasury). When viewed as a single market, the European Union’s global share of total direct premiums written – around 29 percent – is also comparable to that of the United States.

Globally, direct insurance premiums increased by 3.1 percent to US $4.7 trillion in 2016, as compared to the 4.3 percent growth in 2015. The growth in global premiums was led by non-life business which increased by 3.7 percent, with life business advancing at a slower rate of 2.5 percent. Growth in total insurance direct premiums written was stronger in emerging markets where it increased by 14 percent, as compared to an increase of only 0.7 percent in advanced economies.  Interestingly, since 2011, total direct premiums written in China have more than doubled, elevating China to the world’s third-largest insurance market in 2016 (behind US and Japan). In 2011, China was the sixth largest market. Among other emerging markets, India and Brazil (the thirteenth and fourteenth largest insurance markets) also showed good growth. If India’s economy takes off in the way China’s economy has, the potential for growth of the insurance industry here is immense.

Origins of Insurance in India

The concept of insurance has roots in Indian history as seen in the works of Manu (Manusmrithi), Yagnavalkya (Dharmasastra) and Kautilya (Arthasastra). These writings describe the process as pooling of resources that could be re-distributed in times of disasters such as fire, floods, epidemics and famine. While it may not qualify as insurance as we understand it today, the germ of the idea is very much there. Nonetheless, we must acknowledge that modern Indian insurance industry owes its origins to the British. The first general insurance company was set up in Calcutta in 1850 as the Triton Insurance Company Ltd., by the British. In 1907, the Indian Mercantile Insurance Ltd., was set up and it became the first company to transact all classes of general insurance business.

After operating for many years as a public sector monopoly, the process of opening up the sector to private players first began in the early 1990s and gathered pace around the turn of the millennium. In 1993, the Government set up a committee under the chairmanship of Shri R.N. Malhotra, to propose recommendations for reforms in the insurance sector. Based on the recommendation, the Insurance Regulatory and Development Authority (IRDA) was constituted in 1999 as an autonomous body to regulate and develop the insurance industry. In April 2000, IRDA was made into a statutory body and it gradually started opening up the market by allowing new players to enter the business. Foreign companies were permitted ownership of up to 26 percent.

In December 2000, the General Insurance Corporation of India (GIC) was converted into a national re-insurer, after its subsidiaries were converted into independent companies.

At the end of March 2017, there are 62 insurers operating in India; of which 24 are life insurers, 23 are general insurers, 6 are health insurers exclusively doing health insurance business and 9 are re-insurers including foreign reinsurer’s branches and Lloyd’s India.

Despite the global economic slowdown of 2010–13, there was a remarkable recovery in premium growth in India. The Indian insurance industry has achieved a Compounded Annual Growth Rate (CAGR) of 11.48 percent over the past 12 years based on gross premium written.

Non-life insurance has been recording double digit growth for most years since the sector opened up in 1999. The increasing uncertainties on account of natural and man-made causes have created a situation where many large scale disasters occur frequently causing loss to many.  For instance, the Chennai floods of 2015 caused economic losses of around Rs 15,000 crore. Unfortunately, a major part of these losses (estimated at about Rs 10,000 crore) was uninsured, which means that most of those affected by the floods had to recover from the damage using their own limited resources. Unfortunately, despite the frequency of floods (and occasionally earthquakes), segments such as home insurance continue to have a low penetration levels of only 0.7 percent, according to the BCG-FICCI report.

On another front, lifestyle-oriented dis­eases are increasing at a frightening pace. Diabe­tes in India has increased by 50 percent in the last 10 years; and around 200 million Indians are cur­rently believed to be suffering from high blood pressure. Once again it is unfortunate that despite increase in health problems, the penetration of health insurance (an essential risk pro­tection instrument) is very low. As per 2016 estimates, re­tail health insurance penetration (excluding social health insurance schemes) was only around 5 percent. 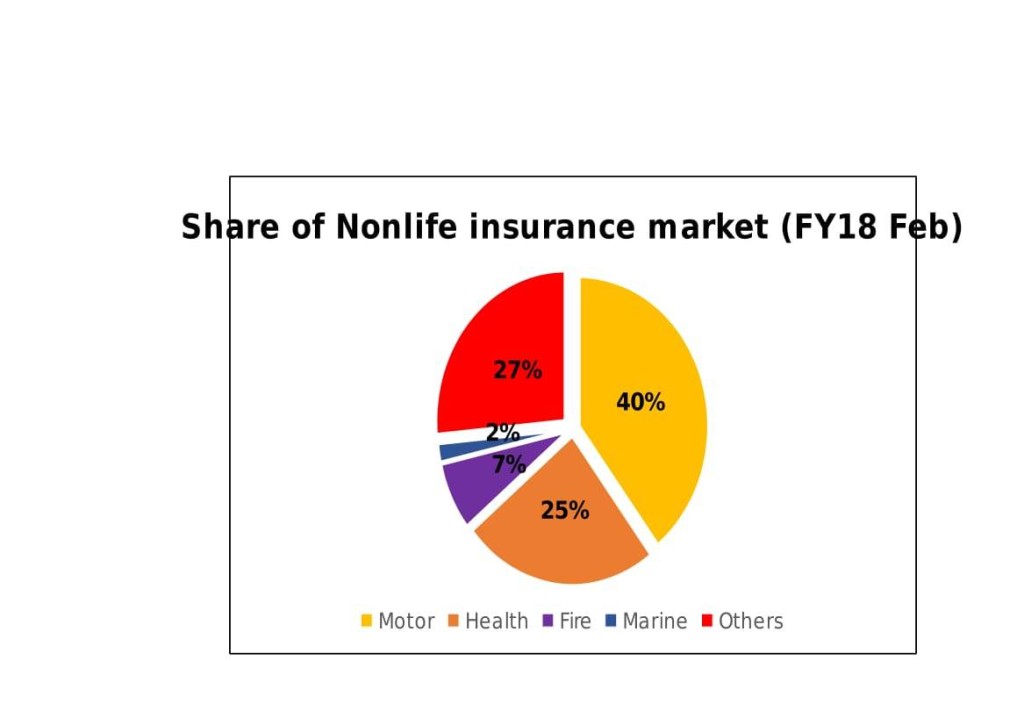 Motor insurance accounted for 39.6 percent of non-life insurance premiums earned in India in FY18 (data up to February). Health insurance accounts for the second highest proportion of market with 24.5 percent share at gross direct premium at Rs 32,816 crore (about US $5 billion). Some of the major private players are ICICI Lombard, Bajaj Allianz, IFFCO Tokio, HDFC Ergo, Tata-AIG, Reliance, Cholamandalam, Royal Sundaram and other regional insurers.  The general insurance industry underwrote total direct premium of Rs. 128,128 crore in FY16-17 as against Rs. 96,379 crore in FY15-16, an impressive growth of 33 percent.

Insurance industry in India is growing at a rapid pace but is yet to reach its full potential. Given the sheer size of the market and the current low levels of penetration, the industry provides ample growth opportunities for all players involved in the sector. A growing awareness of the need for protection and retirement planning will support the growth of Indian insurance industry in the coming years.  What is more, the strong foundation laid for the growth of the sector has been aided by the recent reforms introduced by government. Several initiatives undertaken over the last couple of years will serve to strengthen the country’s insurance sector. Foreign investments were permitted through the automatic route up to 49 per­cent. Service tax on single premium annuity policies was reduced from 3.5 percent to 1.4 percent of the premium paid in certain cas­es.

Economic reforms such as demonetization, Jan Dhan accounts, Unified Payment Inter­face (UPI) and Aadhaar integration have laid the groundwork for a digital and cashless econo­my. The digital revolution will give a boost to India’s fledgling insurance sector too. Following demonetization and the introduction of GST, there is a clear shift of economic activity from the informal sector to the formal sector. As India’s economy becomes increasingly formalized, a greater proportion of the workforce will become eligible for statutory protections and social safety nets in the form of health insurance, accident/ disability insurance, unemployment insurance and retirement plans.  Against this backdrop, India’s insurance sector is truly poised to take off. 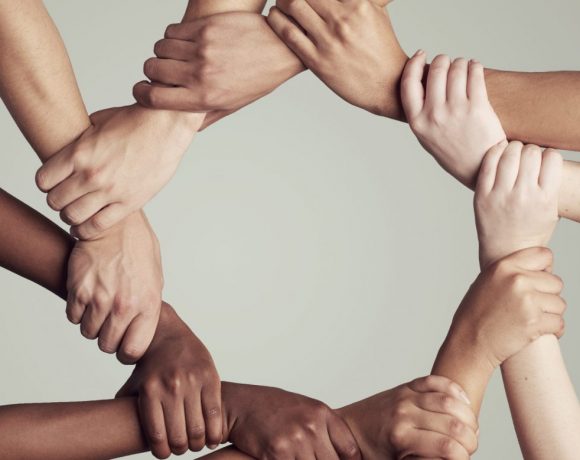