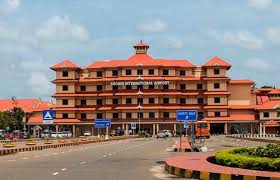 New York: At a gala ceremony held at New York on the sidelines of the 73rd General Assembly of United Nations , Cochin International Airport Ltd was presented with UN’s highest environmental prize the ‘Champions of Earth-2018 ‘ on 26th September 2018. V.J.Kurian who pioneered the idea of making the airport a world’s first fully powered by solar energy received the coveted prize from Mr.Sathyapal Thripati, Assistant Secretary.

Cochin International Airport took home the award for Entrepreneurial Vision category , for its ‘’…….. leadership in the use of sustainable energy. Cochin is showing the world that our ever-expanding network of global movement doesn’t have to harm the environment. As the pace of society continues to increase, the world’s first fully solar-powered airport is proof positive that green business is good business….” Said the official press communiqué issued by the UNEP in connection with the award ceremony. This year’s awardees Include Narendra Modi, Prime Minister of India &Emmanuel Macron, President of France (In Policy Leadership Category for their pioneering work in championing the International Solar Alliance), Joan Carling, indigenous activist from the Philippines (Life time Achievement category) , China’s Zhejiang’s Green Rural Revival Programme is awarded for Inspiration and Action and
Beyond Meat and Impossible Foods are jointly recognized in the Science and Innovation category. Mr.ViJay Keshav Gokhale, India’s foreign secretary received the award for Prime Minister Narendra Modi.

In his acceptance speech, V.J.Kurian said that at a time when State of Kerala is slowly re-building itself, CIAL pledge to fight climate change and global warming and to make this a better world. “…. I am Proud that our honourable prime minister Mr.Narendra Modi is also a recipient of this year’s Champion of Earth Award. I wish to dedicate this award to the people of Kerala, who recently suffered the worst monsoon flooding since 1924, and to our Chief Minister Shri. Pinarayi Vijayan who led us during the difficult days, with his tenacity, fortitude and determination…” He said.

“…We will continue to take up new challenges, to stay driven by new ideas and to innovate for a better future “- He added.

Erik Solheim said in his address that in a world of uncertainty, it was certain that we would not solve the extraordinary challenges our world faces today without extraordinary talent, new thinking and bold ideas. “The Champions of the Earth Award and Young Champions of the Earth Prize recognize those not afraid to chart unknown waters or be the voice of the voiceless. These people are changing our world today for a better tomorrow.”- He added.