CREATING A NEW GENERATION- TO FACE THE CHALLENGERS OF TOMORROW- DR. SIR.GEORGE JOSEPH, Phd(Knight of charity) CMD – THE LEO GROUP

Since 1970, the LEO group has been recognized as a strong contributor in the field of construction, property investments, production, distribution and educational services. With over 43 years of experience of their brands, the LEO group stands tall,  celebrating success in all their ventures. The Leo Group is headquartered in Mumbai, the commercial capital of India, with corporate offices at Cochin, Kuala Lumpur and Manila.  The very inspiring, multi-talented and gifted personality behind the exponential success of the group is Dr. Sir George P. Joseph who is the Founder and Chairman of the Leo Group, Leo English Medium Public School, Dr. Sir George P. Joseph Education & Charitable Trust and the Managing Director of Leo Tourism & Lifespace Developers Pvt. Ltd. In the year 2009, Dr. Sir George P. Joseph was awarded the prestigious degree of Doctorate of Philosophy (Ph.D – Social Psychology) by The Open International University for Complementary Medicine , Colombo in recognition of his outstanding contribution to the community , in various fields and his philanthropic activities for the upliftment of mankind. He was conferred the title of “Knight of Charity” by Dr. Sir John Hopson of the British Royal Family and Grandmaster of the Ecumenical Medical Humanitarian Order of St. John of Jerusalem on 19th June 2011 at the 49th World Congress of Integrated Medicines participated by the delegates of 17 countries at Kuala Lumpur, Malaysia in appreciation of his charitable services.

Born on 15th August 1948 ,  in Chellanam , Ernakulam , Kerala , as the tenth child of Theo Joseph Punnackal and Josephina Joseph Punnackal ; a God – fearing and obedient child, smart and ingenious, with a burning ambition and determination to make a name for himself. With this aspiration and the motivation to excel, he arrived at Mumbai “the City of Dreams” in the year 1970. Hard work and good business acumen coupled with piety and an unbreakable faith in Almighty helped him gain tremendous success in various fields like construction, manufacturing, production, distribution, education, etc. He has also been a supporter of various charitable causes and has helped various social organizations.

Realizing that there were many people in India – especially in his native –  who lived below the poverty line , without access to basic necessities and deprived of education, he set up the Education & Charitable Trust and in year 2001 started the Leo English Medium Public School [Smt. & Sri. Theo Joseph Memorial] , with a vision to provide accessible, affordable and contemporary education while ensuring that the Indian socio-economic and religious values are emphasised. With planning and hard work, the entire development of the school is done under the vision of Dr. Sir George P . Joseph, without compromising on quality, discipline and provides accessible, affordable and contemporary education while ensuring that the Indian socio-economic and religious values are positively emphasized. The vision withholds the responsibility to inculcate in their students , values of integrity, honesty, kindness, tolerance, perseverance and respect that will promote their spirit of enquiry, foster scientific temper within the bonds of humanism, help them become a meaningful part of the environment they live in and make them see that courage has due reward.  As a social reformer, he realised the root cause for the backwardness of the society – only through education, only through an educational revolution, a change can come in the society. Quality education is the backbone of the development of the society. It became his dream to mould a new generation, a duty bound generation, competent enough to face the new challenges of tomorrow.

In his words “We want to mould and raise children to face the challenges of the 21st century and equip them to rise above their current living standards. We also want to equip them to get a good job when they leave home, and become good citizens of the country, good children in their homes and above all to lead a life that is pleasing to God.”  Under his guidance thrives the Assumption University of Thailand (since 1969) and The Medical Center, the School of Medicine, in Manila. It is recognised by the Medical Council of India.

The Kerala Region Latin Catholic Secretariat, the dream project of the Kerala Region Latin Catholic Bishop’s Council is designed by Dr. Sir George P. Joseph & Associates and constructed by the Leo Group. The need for a Secretariat was visioned by the KRLCBC , for the 2 million Latin Catholic community , which required an adequate centre to conduct its activities and programmes at the State Level.  It is located at Alwaye, Ernakulam. The feeling of duty bound towards the Church to help and support its Diocese , to achieve their objectives was seriously taken up by                     Dr. Sir George P. Joseph , PhD (Knight of Charity) and presented them a satisfying  edifice. The Leo Metro City Mall is another impressive state-of-the-art project of Leo Tourism & LifeSpace Developers Pvt. Ltd, under the prestigious Leo Group, which is situated at NH47, Aluva. Some of their very eminent residential projects are the Leo Heights, the Leo Homes and the Phils’ Residency.

Under the initiative taken by him, everyday free lunch is provided to about 50 people at     Chellanam village who live below the poverty line – especially the old people.   It’s volunteered by Dr. Sir George P. Joseph Education & Charitable Trust.

His sons Geo Abel P. George and Leo Sylvester P. George, who are also the Executive Directors         of  the Leo Group, help in taking the establishment to the next level of its growth.                             Ultimately, Dr. Sir George P. Joseph advices us to encounter any complicated issue with patience and composure and you can win over it easily. 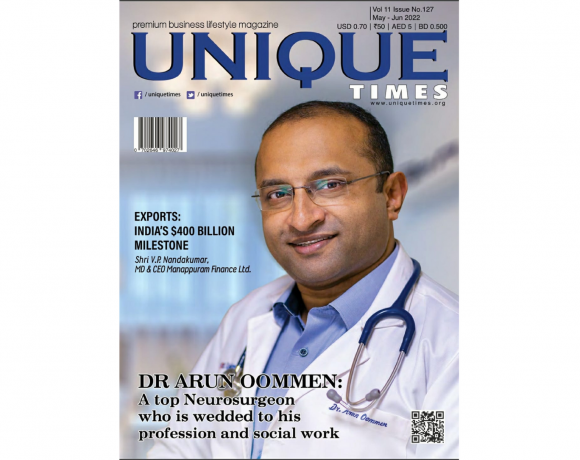 Dr Arun Oommen : A top Neurosurgeon who is wedded to hisprofession and social work.